Whichever you choose will be dependent on what you plan on using it for! Are you looking to make a temporary pen while having your horses out on pack camp? Or are you looking to build permanent pastures at your home farm?

Before doing so though, I want to give a quick note on electrical wire fencing.  It is different from nearly any other kind of fencing, and the differences are important to understand if it is to be used safely!

So, if you are looking for a quick, easy, inexpensive fence to install, that will still keep your horses in, look no further than electric horse fencing!

Best Electric Fence For Horses: A Note About Electrical Fencing

Like I said, before getting into the product review section of this article, I want to take a moment to discuss the safety factors involved with electrical fencing for horses.  Obviously, electrical wire fencing is different from your average wood or PVC fencing.

Safety Around Electric Fence For Horses

Electrical wires can be dangerous if not used properly;  they can spark, catch fire, cause unintentional shocking, and more.  So, to avoid these damages, it is best to be informed of the proper handling of electric fence wire, before deciding to purchase it. Second, while the shocks from electrical wire fencing can be felt, they are not necessarily painful or damaging in any way (when maintained properly).  They are simply like a vibration that will instill psychological boundaries into the animals enclosed by them.  Think of it as an invisible fence for dogs.

This is important to note because, as mentioned before, the stimulus caused by the electric wire acts to impose mental boundaries, and will not physically keep a horse enclosed.  So, if your horse is known for breaking out of the pasture, or if your horse may be unsure of the boundaries of his pasture, solely electric fencing might not be for you.

Fourth, ALWAYS wear gloves while handling electrical wire fencing.  Not doing so can result in serious injury.  Think of what you wear on your hands. Do you wear rings? A watch? Bracelets? Anything else that might be made of metal?

Those things can conduct electric current, which will be transferred to them from the wire in your hands.  Exercise caution when it comes to any conductive materials that may be nearby during your handling and installation of electric wire fencing.

Electrobraid comes wrapped around a spool, looking like yarn or twine! With each spool purchased, you receive 1,000 feet of wire.  Many vets and professionals commend Electrobraid for its safety features and high quality.

Electrobraid is designed specifically with the intent of being used on equine pastures, as opposed to other electric wire manufacturers that create generic electric wire for all livestock and outside-animals.

Although, if you are looking to enclose more than just horses with your electric wire, this may not be a good thing for you. 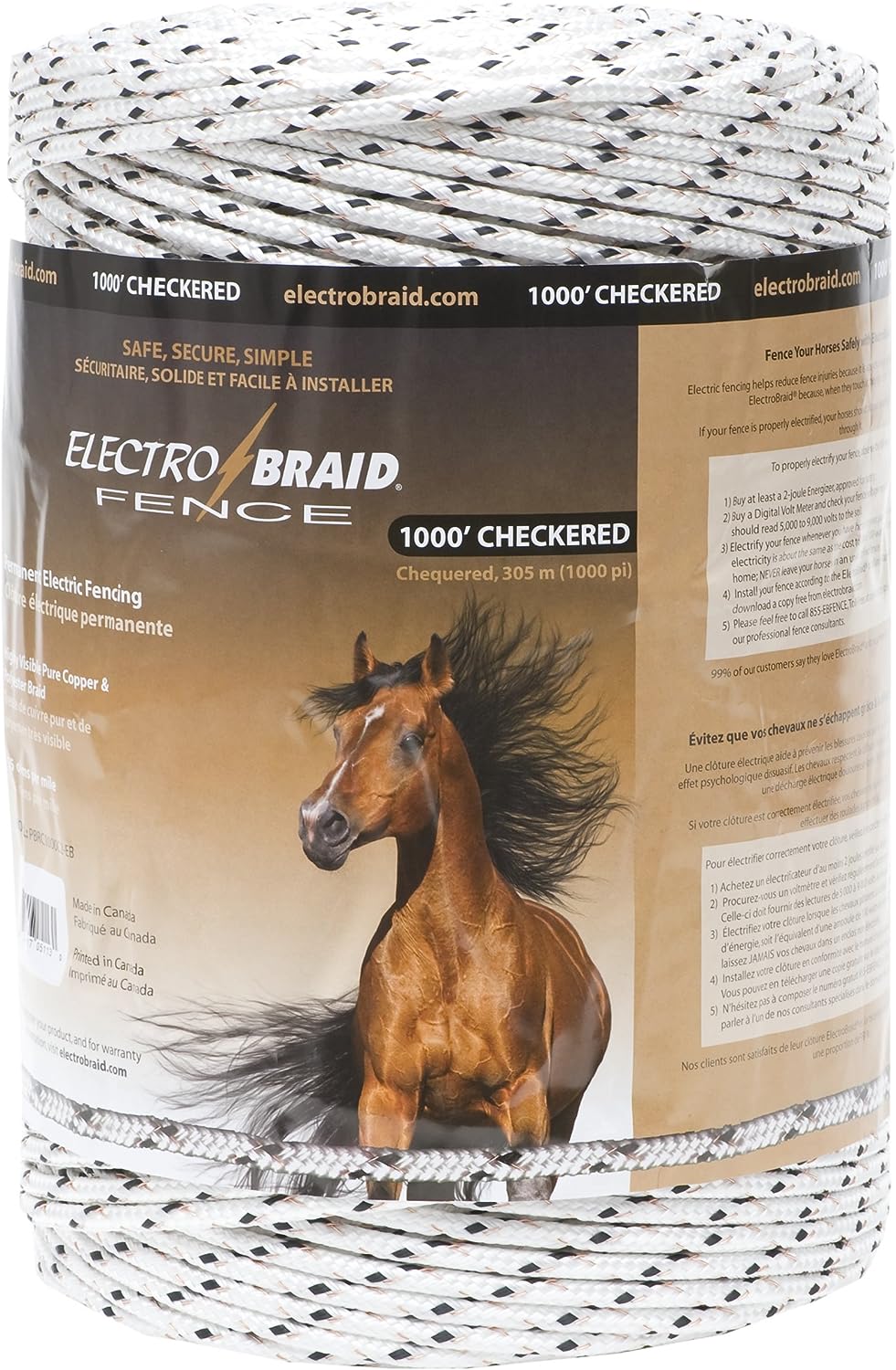 Electrobraid is also known for being able to stand up to harsh weather.  For me, where my area gets 100 degree days and -15 degree days, depending on the time of year, this characteristic is especially attractive.

Electrobraid is typically used as temporary fencing.  While you can try to use it as a permanent attachment to your fencing, that is not its intended purpose, and you may be disappointed with its performance as such.

In contrast, Zareba creates a permanent electric wire fence.  Instead of coming in a yarn-and-spool type design, Zareba’s design is akin to scotch tape.

Zarebas’ electric wire fence is known for many things. The most notable of these is its easy installation, which likely has much to do with its tape-like design.  It’s easy to install on your own, and relatively inexpensive, making it attractive to those with at-home farms.

It is also designed specifically with horses in mind, with a breaking load of 320 lbs.  But, it can also be used to house other, smaller livestock safely. 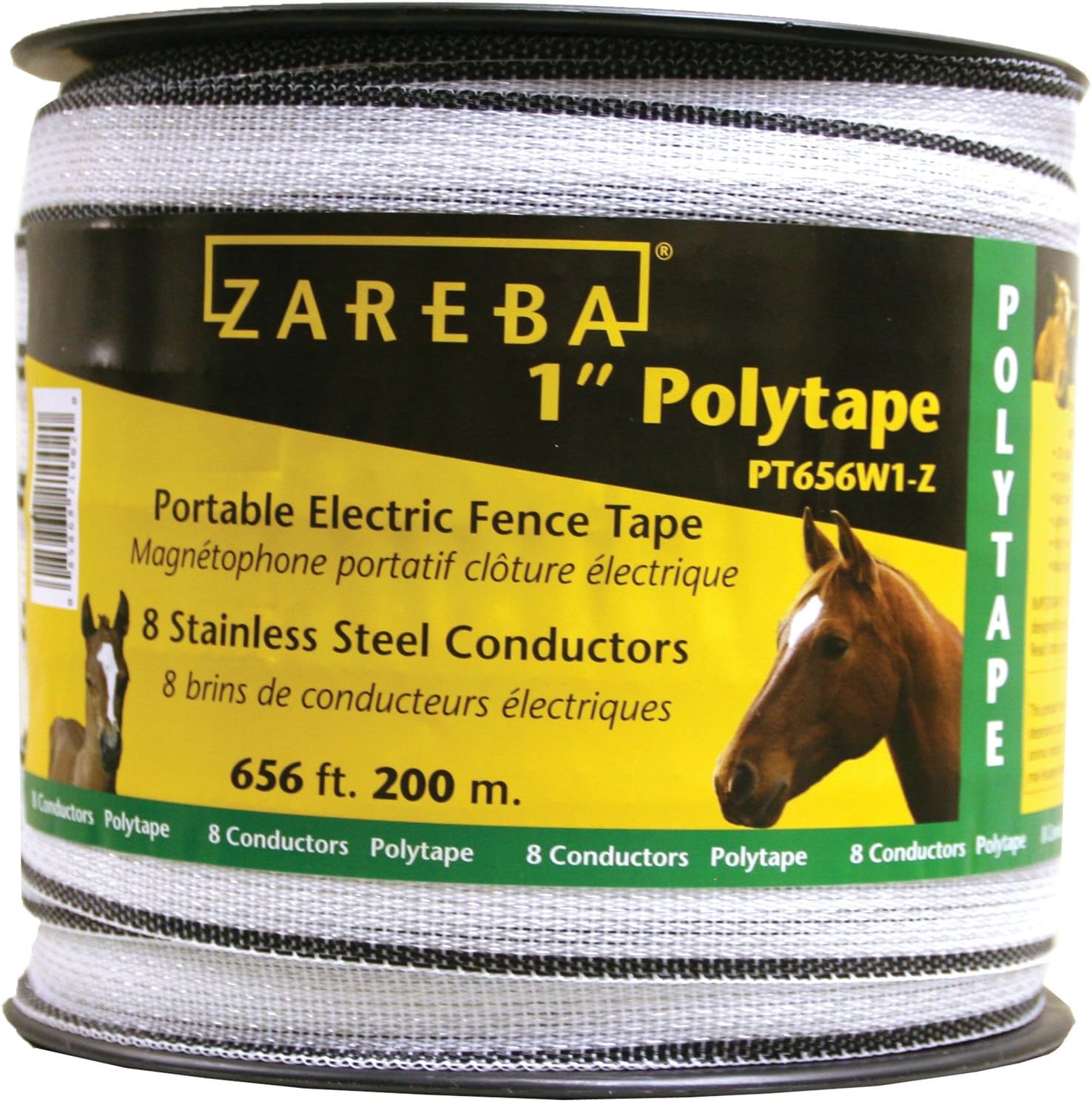 Like many other electrical wire companies and users, Zareba does NOT recommend using solely its wire for fencing.  Instead, it recommends attaching this wire to a permanent fence structure, such as wood, or wire.

It is very suitable to be mounted atop other wire fences because it is thicker than most other wire fencings, which in turn makes it more visible to passersby.

Gallagher is a more middle-of-the-road option when it comes to electrical wire fencing.  There are great things about it, but it’s not quite the caliber of ElectroBraid or Zareba when it comes to quality.

Gallagher is also a yarn-and-spool type design, and one pack will get you 1,620 feet of wire, which is comparable to ElectroBraid.  However, Gallagher wire is known for being thinner than other electric horse fence options. 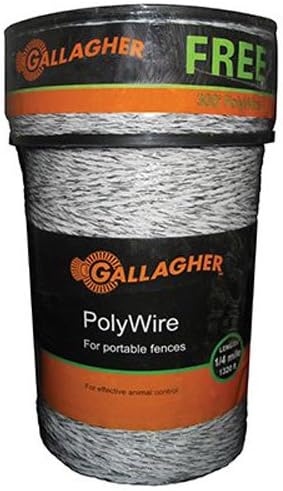 But, this also raises quality questions.  While Gallagher isn’t necessarily known for bad quality, and its wire is tough and resistant to wear and tear, there’s always going to be an inherent weakness in a thin wire that is found in a much lesser degree in thicker wires.

Gallagher wires come in white, making them visible to passerby’s and horses, which is a notable safety feature of their product. It is also designed to be attached to permanent fencing.

An option very similar to Gallagher is Family Portable Electric Fence, except that it is designed for portable, temporary fencing, not permanent fencing.  It also comes in a yarn-and-spool design.

Family Portable Electric Fence is also noted as being thinner than many other electrical wire fencing options.  This tends to matter less in temporary fencing than it does in permanent fencing.

Electrical wire on temporary fencing doesn’t need to last as long as it does on permanent fencing.  So, it isn’t as much of a concern in the situations that this fence is intended for. 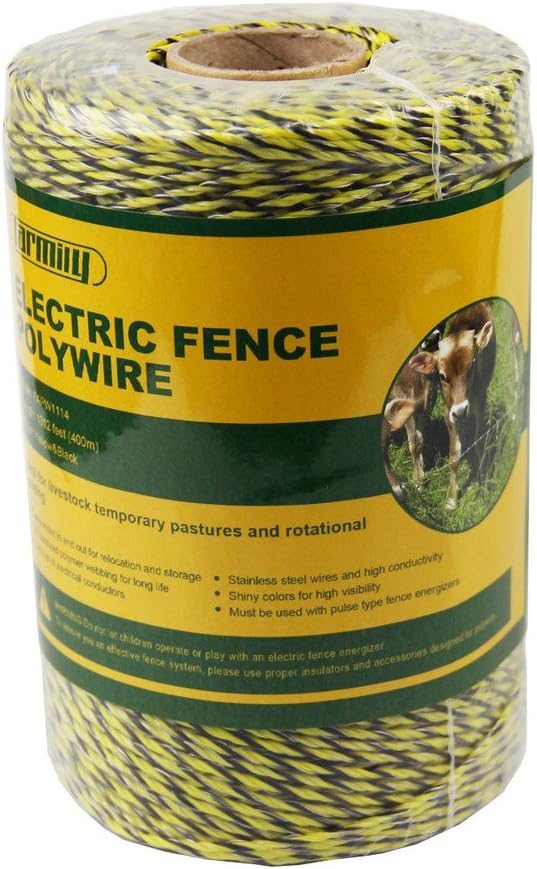 Family Portable Electric Fence is noted as being rustproof and waterproof, though it seems that one of those things would necessarily lend to the other.  In any regard, the waterproof ability is an essential characteristic for anything carrying an electric current.

In another review of Family Portal Electric Fence, Horse and Foals describes it as being “ a good option for those who need to put up some emergency fencing quickly.”

As you can see, there are many options when it comes to choosing electric wire fencing for your equine friends! Please note that it is NOT recommended that electrical wire fencing be the only form of fencing you use.

It is designed to be mounted on a permanent fencing, such as wood, PVC, or other, non-electrical wire.  Please use caution when installing electrical wire fencing as it can shock you, and will transfer its charge to conductive materials.

Electrical wire fencing can be an effective way to psychologically establish pasture boundaries with your horses.  It is not painful, but it does provide them with a stimulus that they will make note of, similar to an invisible fence with dogs.

Electrical wire fencing should be easy to install, but if you are ever unsure or uncomfortable with handling it, professionals can be hired to help you.  Try calling your local tack and feed store, or farm goods store for help.

That being said, I hope this article helped you get a feel of what is going on in the electric fencing for horses market today! If so, please share this article, and share with us your experiences using electric wire fencing!