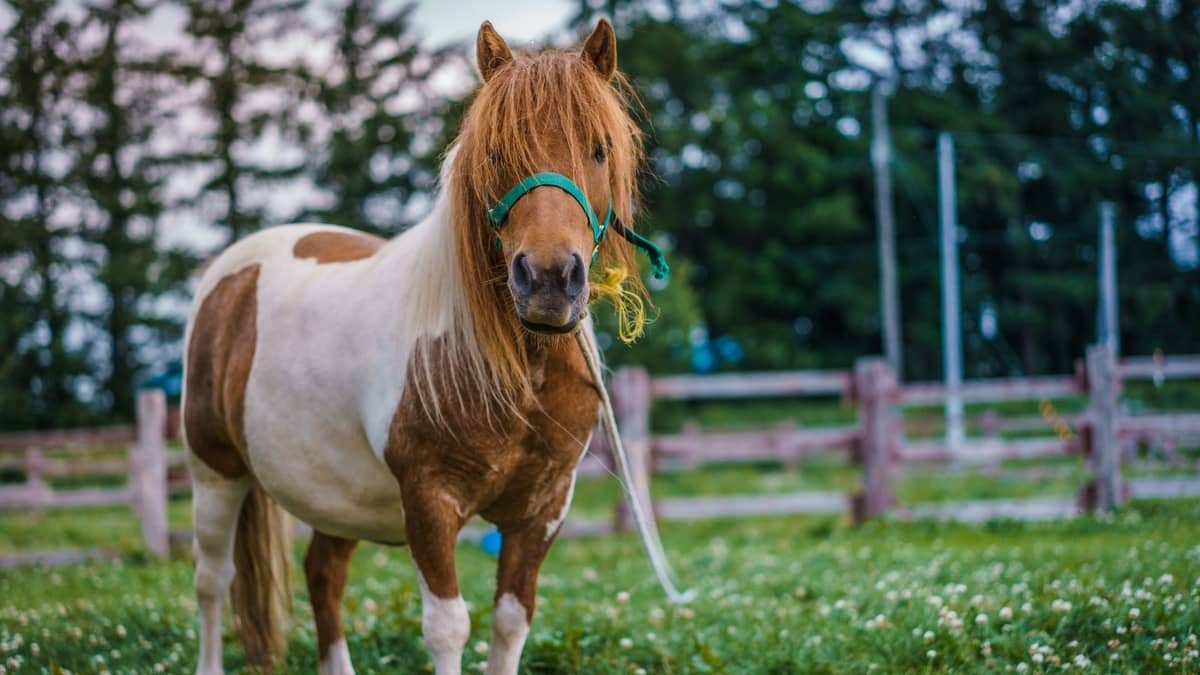 We all know that ponies come in many different shapes and sizes. From tiny little Shetland ponies through to the strong, powerful Dales pony, they all have different weights. But what is the average weight of a pony?

Let’s find out all about ponies and discover what their average weights are!

What Is A Pony?

It would be easy to assume that a pony is just a smaller type of horse, and in some ways this is correct. Ponies are almost always smaller in height than horses. However, there are many other differences between horses and ponies.

Another strange anomaly is the naming of miniature horse breeds. These are certainly small enough to fit into the pony category but are very different in terms of appearance. Therefore they are always called horses, even when they are only 28 inches tall!

Ponies are also normally stockier and more thickset than horses, with muscular bodies and strong legs. They tend to have a wider chest and a shorter neck. Ponies normally have short heads with cute features, unlike the refined and elegant horse.

Horses normally have a finer, thin coat, whereas ponies are notorious for their thick hair and abundant manes and tails.

In terms of physical ability, ponies are very strong for their size and can be very agile with high levels of endurance. However, lighter horse breeds will come out on top when it comes to speed and jumping ability.

How Much Do Ponies Weigh?

The weight of a pony will vary according to the breed. Let’s take a look at some of the most popular pony breeds and find out what they weigh!

One of the most famous small pony breeds in the world, the Shetland pony stands at an average height of 9 to 9.3 hands high. However, these tiny equines are packed full of power, and are immensely strong for their size!

One of the reasons for their strength is their thickset and muscular body. The Shetland pony weighs an average of 220 kilograms and can use this body mass to help pull heavy loads across rough terrain. Traditionally, these tough ponies were used on the Shetland Isles to carry fuel and fertilizer up and down steep hills.

The Welsh Mountain Pony is a small breed of pony originating from the United Kingdom. This pretty and elegant breed of pony is adapted to survive on difficult terrain.

Welsh Mountain Ponies are between 11 and 11.3 hands high and weigh an average of 220 kilograms.

The Exmoor pony is descended from wild ponies who roamed free on the English Exmoor hills. This beautiful breed of pony is very sturdy and has distinctive lighter patches around its eyes and mouth.

Exmoor ponies are between 12 and 12.3 hands high and weigh an average of 340 kilograms.

The Dales pony is one of the tallest pony breeds, at an average of 14 to 14.3 hands high. This ancient breed from northern England was used in the past as a pit pony, pulling heavy wagons of coal from deep underground mines.

The average weight of a Dales pony is 510 kilograms, over twice that of the tiny Shetland!

How Much Does The Smallest Pony Weigh?

The record for the smallest equine ever was held by a mare called Thumbelina. This tiny equine, who passed away in 2018 at the age of 17, weighed just 26 kilograms. She was only 17 inches tall – absolutely tiny!

Records do not show what type of horse Thumbelina was, so we cannot be sure if she would have been classed as a pony or a miniature horse. It is thought that she was born with a condition called dwarfism, which is the reason for her tiny size.

Read more about How Much Do Miniature Horses Weigh?

How Is Pony Weight Calculated?

It is essential your pony maintains a healthy body weight. If a pony is underweight or obese, it is at risk of many permanent or life-threatening health conditions.

When it comes to the smaller breeds of pony, a small change of just a few kilograms can mean the difference between being too thin or becoming overweight. This means that it is vital that you monitor the bodyweight of your pony carefully.

One of the easiest ways to monitor the weight of a horse is by using a weighbridge. You may be lucky enough to have one in your barn, or you could use the one at your local veterinary clinic. There are also public weighbridges in most regions of the country.

You can also check the weight of your pony using a device called a weigh tape. This measures around the girth of the pony, and tells you their estimated body weight. This is not the most accurate method for weighing a pony but can be useful to see if they are gaining or losing weight.

As with humans, it is not only the overall weight that matters. We need to look at the overall condition of our ponies, to check they are not carrying too much excess fat. The method used to do this is called body condition scoring.

This is a simple system where parts of the pony’s body are compared to a chart of pictures. Each part is given a score, and these are added up. The final figure tells you whether your pony is too thin, too fat, or absolutely perfect!